On 9 October 1946, the Unimog Prototype 1 completed its first test drive. Chief designer Heinrich Rößler himself was at the wheel, and he tested the prototype, which had no bonnet and was fully laden with wood, on rough forest roads. The prehistory is closely linked to the difficult situation in the post-war period, when Germany was suffering supply shortages. In 1945 and 1946, there was a dire lack of food. It was this situation that gave Albert Friedrich, who for many years was head of aircraft engine development at Daimler-Benz AG, his idea of an agricultural motorised vehicle which should help to increase agricultural productivity. 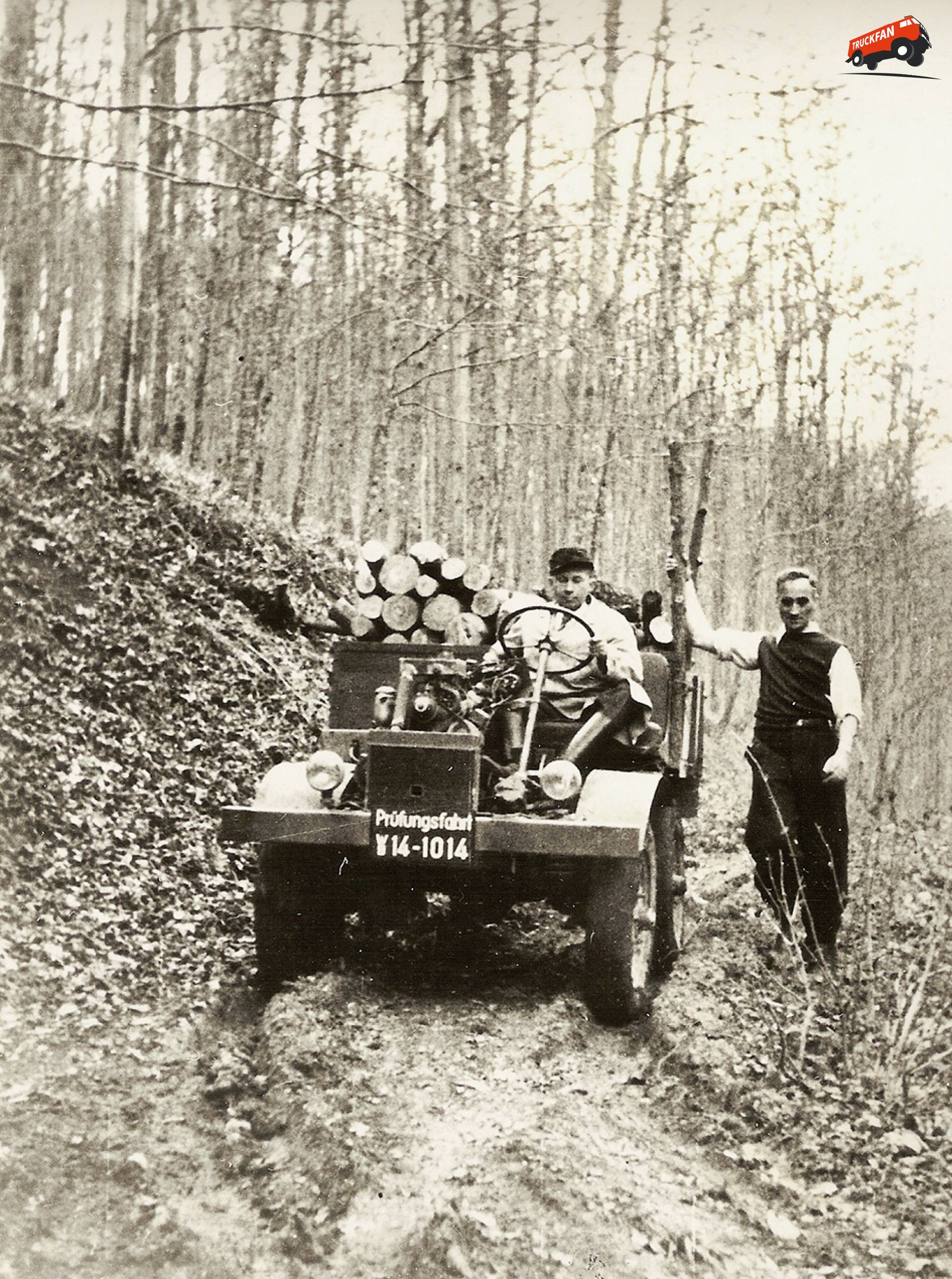 1945 was an elemental year for the Unimog idea and its realisation. Albert Friedrich returned to Stuttgart-Untertürkheim in June 1945. He wanted to help with the reconstruction of Daimler-Benz AG and at the same time contribute his idea of an agricultural motorised machine. On 4 August of that year, an engineer for Daimler-Benz AG, under the leadership of Friedrich, drew up the first blueprint for such a vehicle. This blueprint was revised, and on 7 September 1945 it was presented to the board of company directors, who, however, showed little interest in the project. Despite this decision, the project blueprint was submitted on 9 October 1945 to the “Production Control Commission” of the responsible American military authority, with an application for permission to manufacture ten test vehicles. This approval was granted on 20 November 1945 by the responsible “Food and Agricultural Group” of the British and American occupied zone.

The implementation of the basic plan began in January 1946
By then, Friedrich had increased his contacts with the metalwork company Erhard & Söhne in nearby Schwäbisch Gmünd, so that in December 1945 the “L” department (for Landwirtschaft, i.e. agriculture) was able to make the project reality. Friedrich passed the leadership of the project on to his former subordinate, designer Heinrich Rößler, who took up the post on 2 January 1946. 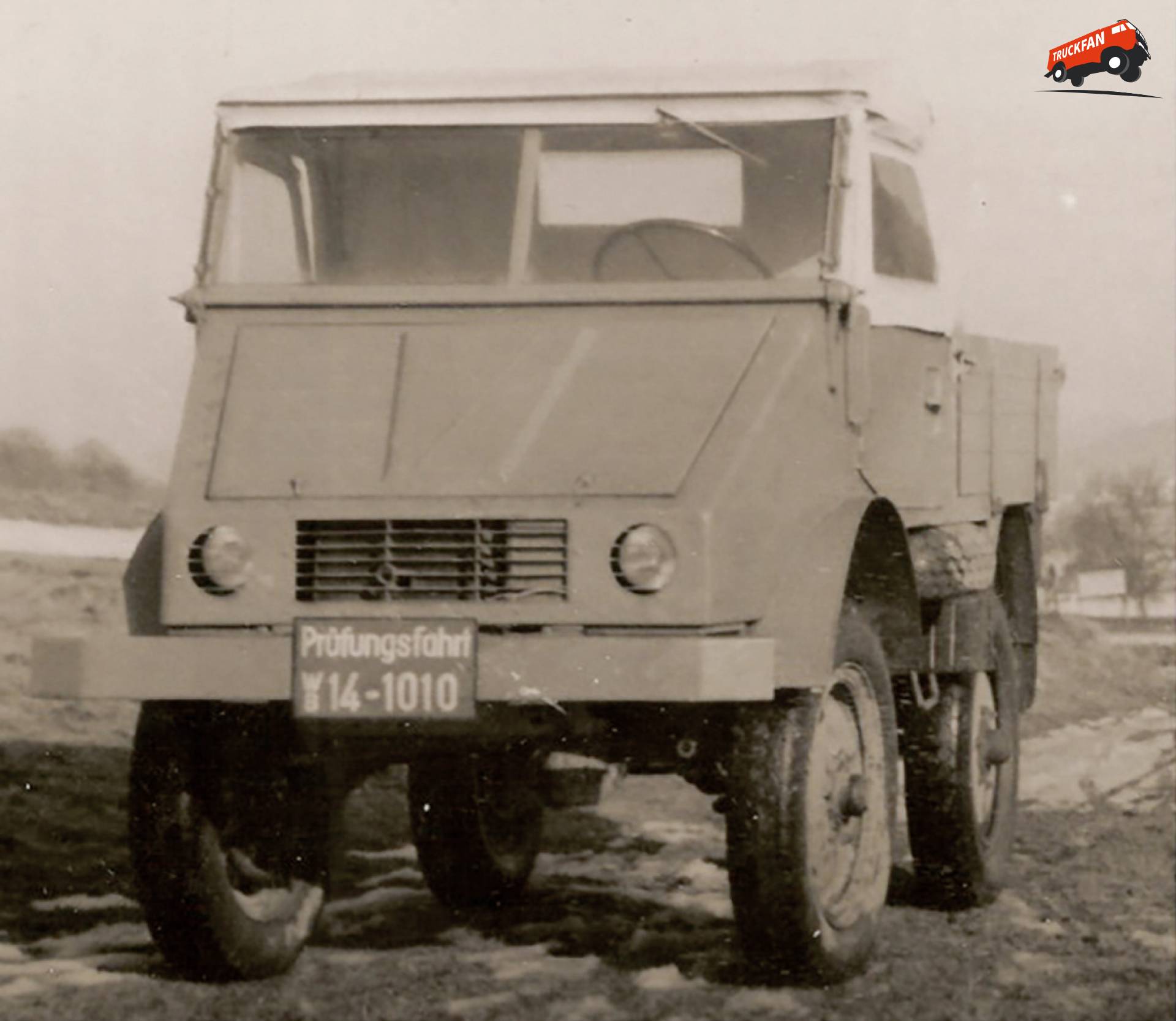 In only a few weeks, a new overall plan was developed, with the engine and gearbox positioned directly to the right of the middle line of the vehicle. This meant that the torque tubes – which protect the drive shafts – could be at right angles to the axles. As a result, only four drive joints were needed for the chassis. This was a brilliant design which, 70 years later, is still used for the Unimog of the highly mobile U 4023/U 5023 series.

Between January and March 1946, the definition of the “engine-driven multi-purpose machine” was also finalised:
-top speed of 50 km/h (a tractor was only half as fast)
-sprung and damped axles
-all-wheel drive and differential locks at the front and rear
-brakes on the front and rear axles
-frame design similar to cars and trucks
-two-seater cab with a closed cover and upholstered seats
-auxiliary load area over the rear axle with 1.0 t load-bearing capacity
-static weight distribution: 2/3 on the front axle, 1/3 on the rear axle
-implements attachable on the front, middle, sides and rear
-power take-off shafts at the front, middle and rear
-power take-off for implements

The story of a truly remarkable vehicle
In March 1946, Hans Zabel from Gaggenau, who had been part of the project from the beginning, coined the term Unimog (Universal-Motor-Gerät, i.e. universally applicable motorised machine). By 1954, the “universally applicable motorised machine for agriculture” had become a vehicle that could be equipped with 66 different agricultural appliances. Change and technical progress were constant companions in the course of the Unimog history. To date, there have been thirty different model series and almost 400 000 vehicles sold. No other commercial vehicle in the world can function as a tractor, towing vehicle, truck, fire fighting and exploration vehicle, bus and working machine.