After exactly 30 years away from the public eye, Nissan has brought one of its most iconic motorsport machines back to life. The stunning 1987 Nissan Patrol Fanta Limon Paris-Dakar rally car has been fully restored to its former glory, and made an emotional return to its spiritual home in the sand dunes of the Saharan desert. 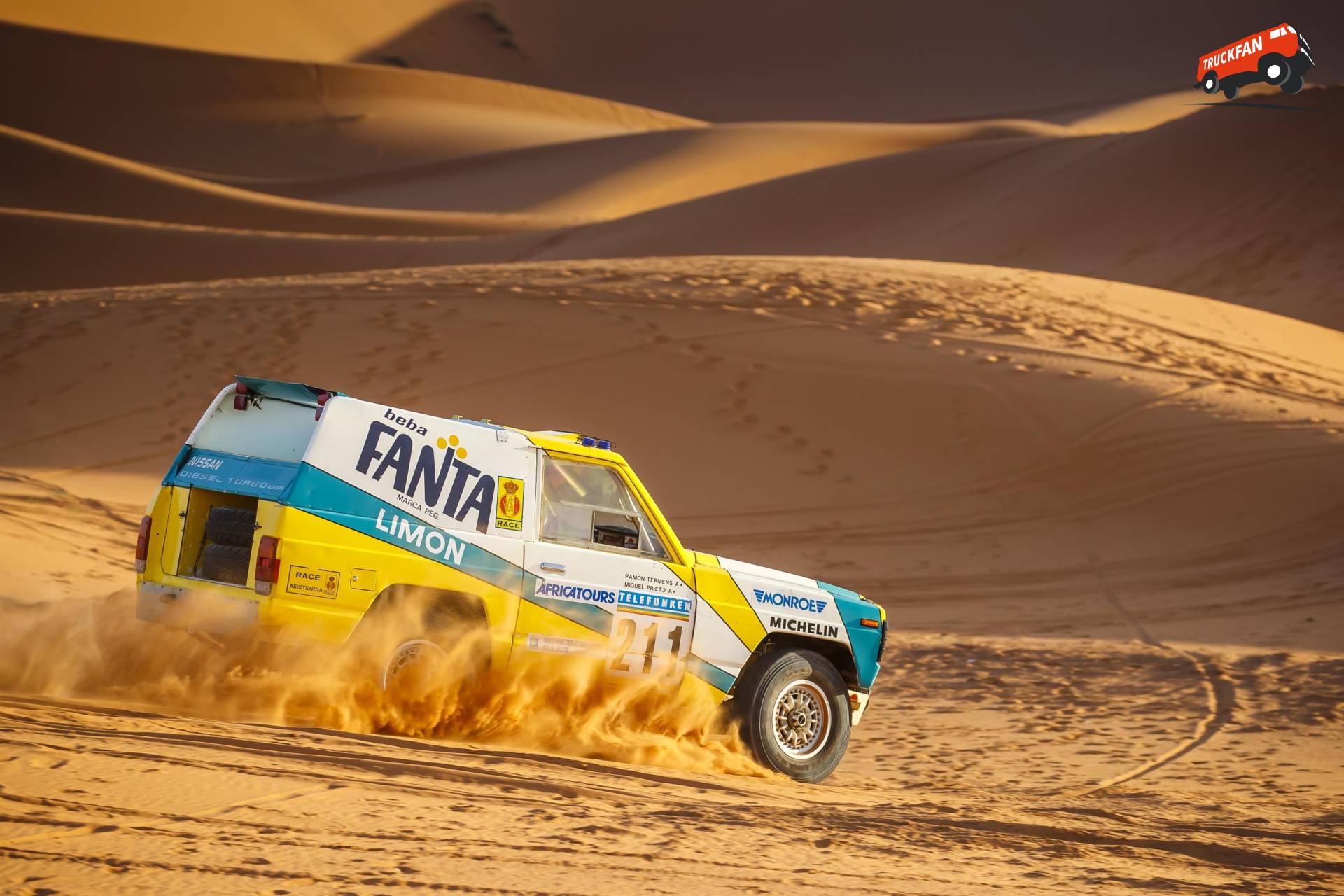 The car’s legendary status is second to none, writing its very own chapter in Dakar mythology. It took victory in the diesel category, and was the first diesel car to ever finish in the race’s overall top 10, taking ninth spot. Today, all the top cars are diesels.

The Fanta Limon car has been given a new lease of life thanks to a dedicated team of engineers at Nissan’s European Technical Centre (NTCE) in Barcelona, Spain. For more than two years they restored the car after work and at weekends, turning it from a rusting wreck in a Spanish museum to a highly capable off-road racer. 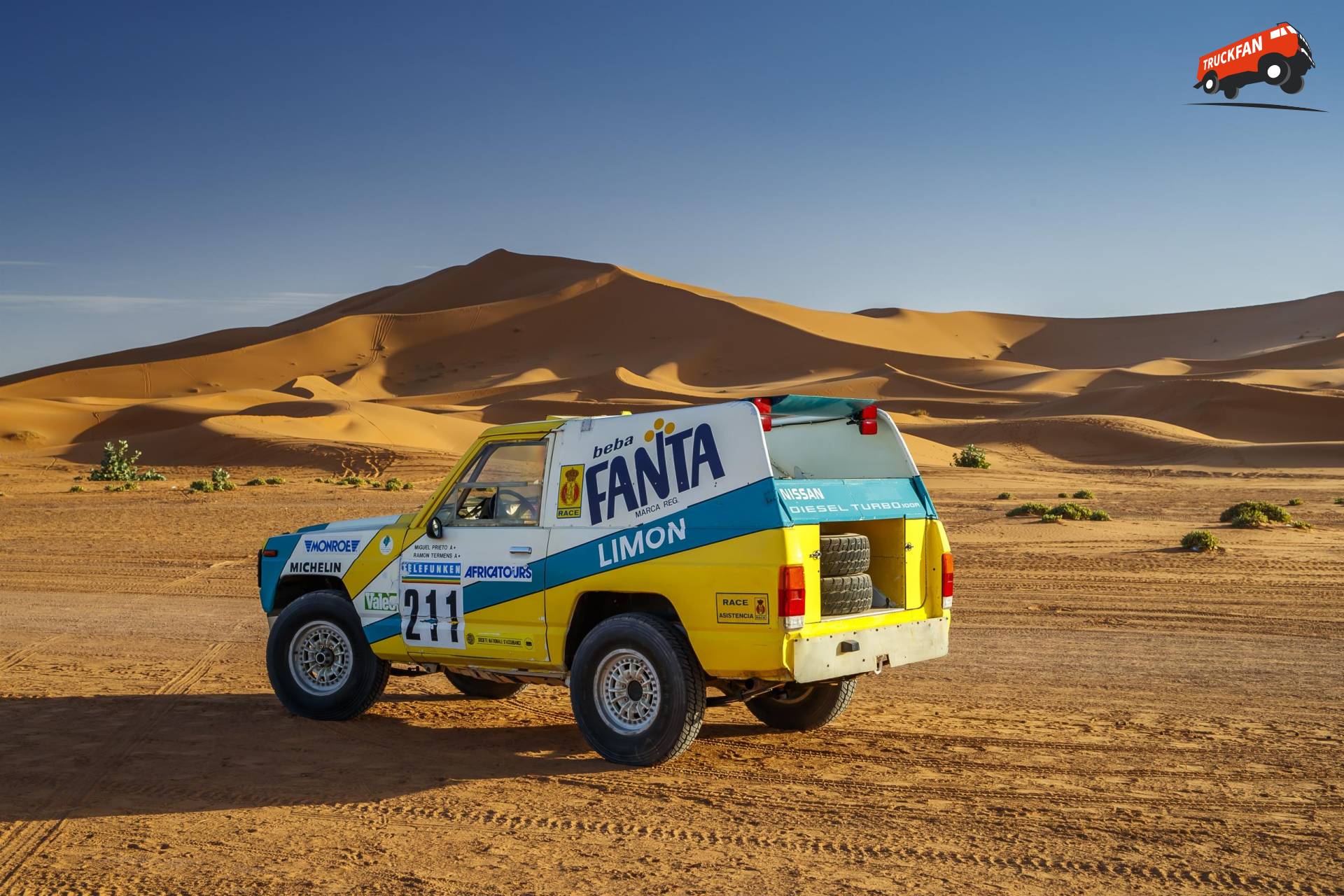 Pedro Diaz Illan is Manager of the Electrical and Electronics Engineering team at NTCE, and the only member of the original 1987 team still working there. “That was a proud moment. Our brains, hearts and souls have gone into this project and it has not been easy. But to see the car in the desert again was just fantastic.”

The story of the car’s success in the 1987 Paris-Dakar rally starts the year before, when Nissan Motorsport devised a plan to take part in high-profile off-road endurance rallies. The base vehicle was to be the Patrol – Nissan’s popular 4×4 vehicle – with the team at NTCE in Spain leading the project. 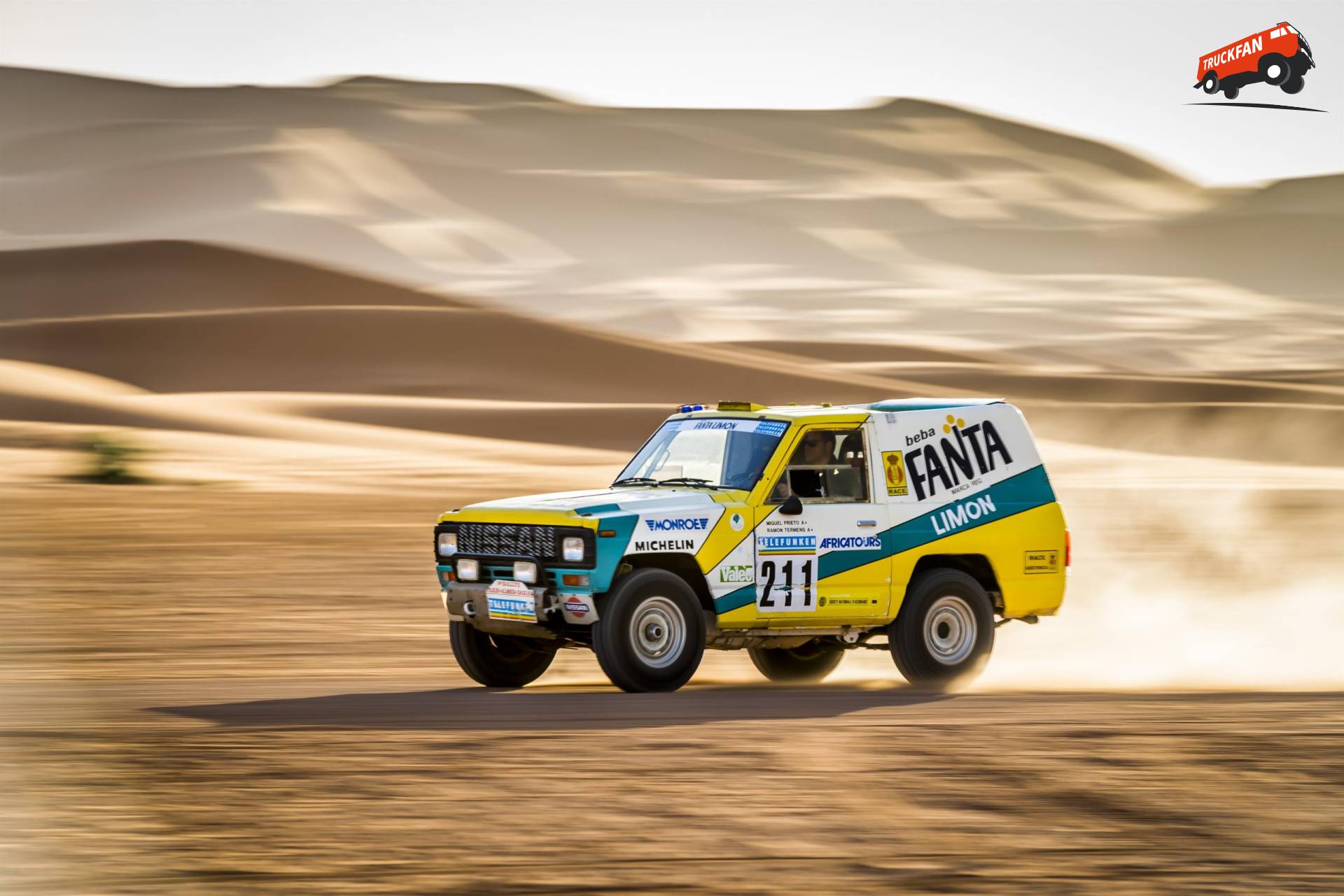 The sponsorship with Fanta Limon came through links between Nissan Spain and drinks brand Coca-Cola, which was looking to exploit the global publicity generated by the Paris-Dakar race. Success came quickly, with victories in the diesel class in three events during 1986 (Tunis Rally, Baja Aragón and Raid Pharaons in the Raid Pharaons the car was also overall winner).

But the main target was the Paris-Dakar. It began on 1 January 1987, with 312 vehicles lining up at the start of the gruelling 13,000 km race through Europe, Algeria, Niger, Mali, Mauritania and Senegal. The Nissan Fanta Limon team entered two vehicles; car 211 with Miguel Prieto and Ramon Termens as driver and co-driver respectively, and car 212, crewed by brothers Jorge and Hansi Babler. 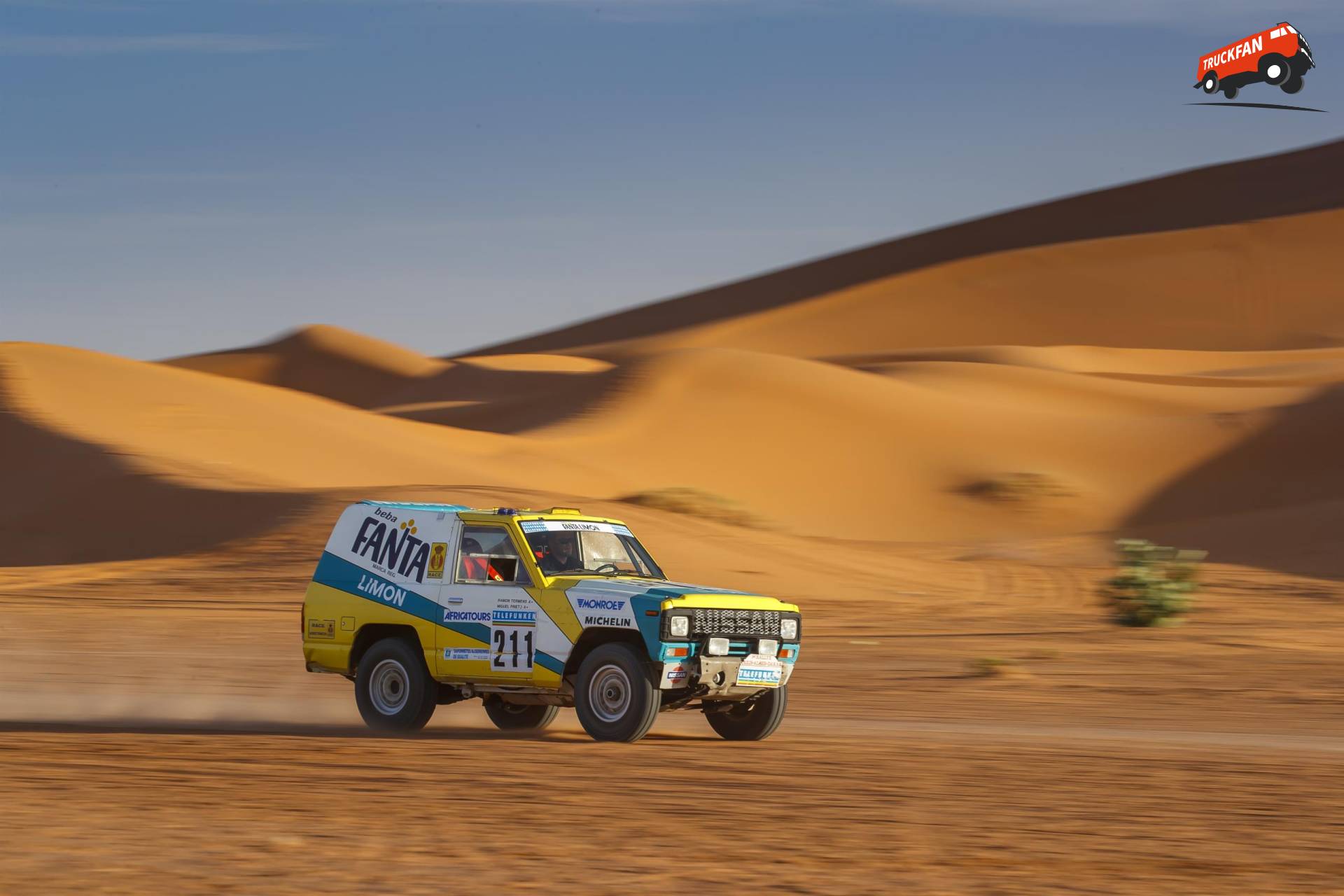 Things did not run smoothly. The team’s support truck broke down on the second stage, leaving the pair without spares for the rest of the race. Car 212 was eventually forced to withdraw after rolling down a dune, but 211 battled on to the end. It was the first diesel to finish, in ninth place overall.

Mission accomplished, the cars were retired from racing. The whereabouts of 212 is unknown, but 211 was offered to the Salvador Claret, a private car collection and automotive museum south of Girona, Spain. There it remained for almost three decades.

The idea for recovering the car came in February 2014, when NTCE technicians spotted images of it on an internet forum. Realising the 30th anniversary was less than three years away, they contacted the museum to ask for it back.

Juan Villegas, an NTCE technician and part of the restoration team, explained: “The engine was in terrible condition. It was impossible to start and many parts were heavily corroded. The front axle was quite damaged, but the worst thing was the electrics, which had been badly attacked by rats.”

The wreck was transported to NTCE Barcelona in May 2014 and the eight-strong restoration team began work, using their own time at evenings and weekends. They searched all over Europe for parts, asking Nissan dealers to search their warehouses for old stock. Some components were bought used and also restored.

Juan added: “We wanted the car to be accurate in every way, and were lucky to get the very old drawings and service manuals from NTCE. We followed all the fine adjustments to get the exact Paris-Dakar race set-up.” 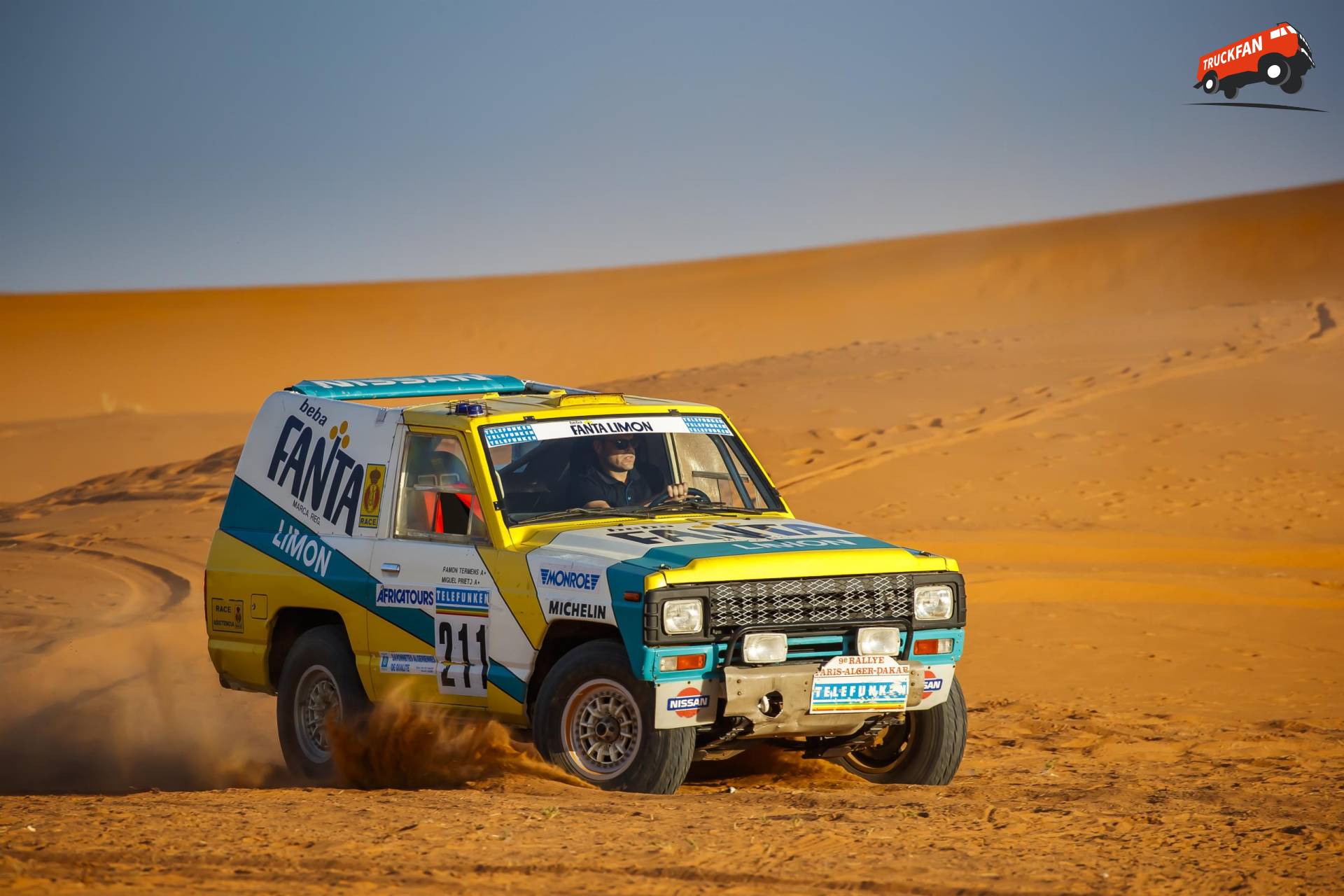 In November 2016 the Patrol was complete and made a return to its spiritual home – the sand dunes of the Sahara. It was an amazing moment for the team.

Juan commented: “The spirit of innovation that was at the heart of Nissan’s entry into the 1987 Paris-Dakar has been all around us as we have completed this project. We felt inspired by the memory of that team, which decided to participate in the most challenging race in the world and achieved such success.”

The restoration’s cost has been covered by Nissan as part of its ‘Performance Innovation’ fund. It’s a pot of money set aside each year for projects which bring the company’s brand promise – Innovation That Excites – to life.