The ultimate Moroccan stage of the AFRICA ECO RACE 2019, made up of a special sector of 420 km and of a 214 km liaison towards Dakhla, will have been more intense than what we would have been able to plan. Especially on four wheels where the battle between Buggies raged. Some are relieved to get out of Morocco. Others are worried about what is awaiting in the Mauritanian desert. But all are decided to take advantage of the rest day on the edge of the Atlantic Ocean to Dakhla to get back strength after practically 2000 kilometers of special stage in Morocco.

Elisabete JACINTO imperial in the truck category
The large smile of Elisabete JACINTO when she got out of his truck was satisfying to see. The Portuguese driver, perfectly assisted by Jose MARQUES and Marco COCHIN, won first place in the truck category by getting the 7th time of the day at only 10’06’’ from auto leader. Taking into account that the MAN team stopped 8 minutes after 3km for some mechanical problems in the intercooler, we can say it’s an impressive performance. A result that enables them to take the lead again of the truck overall ranking, also due to the clutch problems of Tomas TOMECEK TATRA, towed to come out of the track. Good deal for Igor BOUWENS, Tom DE LEUW and Ulrich BOERBOOM, 10th with their IVECO and this, even though they had a problem with their turbo. The Belgiums are ahead of the Holland team Johan ELFRINK and Dirk SCHUTTEL who place their MERCEDES on the truck podium for the first time since the start of the AFRICA ECO RACE. In the overall ranking, Nöel ESSERS, Marc LAUWERS and Johan COONIX are now in second place ahead of Igor BOUWENS, who clearly has the best progression. 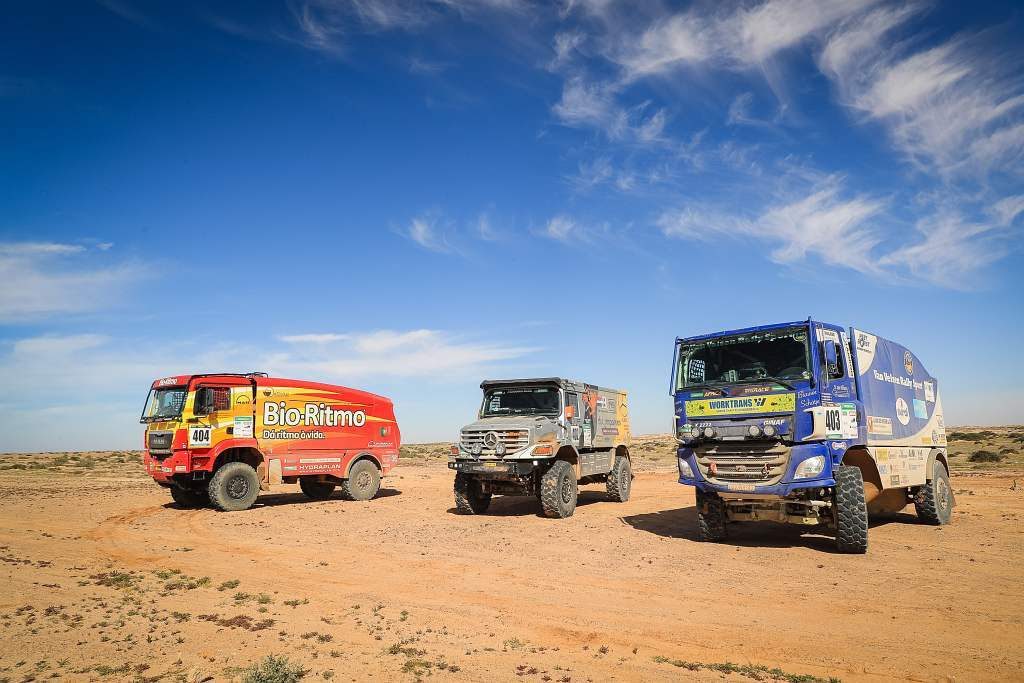 This Sunday 6th of January 2019, the competitors of the AFRICA ECO RACE will benefit from a day of rest in Dakhla, this sand bank in the Southern extremety of Morocco where temperatures are around 25 degress. A well deserved rest to reboot along the Atlantic Ocean before the second week in the Mauritanian desert.

Elisabete JACINTO – MAN – TEAM BIO-RITMO – Portugal: 1st of the stage and 1st of the overall truck: “What a joy to win today! Especially since we were forced to stop after 3 kilometers to put a hose intercooler dislodged because of a crampon that broke off a tire. We lost 8 minutes but I attacked a maximum throughout the stage and Jose navigated perfectly. I leave Morocco, which is my favourite field, at the head of the race. I hope everything goes well in Mauritania where we can waste a lot of time in the dunes. In the meantime, we will enjoy the day of rest to work even further to improve the truck so that it is perfect next week.”