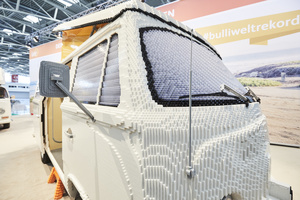 Using 400,000 LEGO® bricks, two experienced LEGO® model makers have built what is probably the world’s biggest camper made out of LEGO® bricks. The full-size T2 was unveiled today ahead of the f.re.e leisure and travel fair in Munich. Visitors young and old to f.re.e (20 – 24 February) will be able to admire the 700 kilo Bulli at close quarters. The vehicle that served as the blueprint for the model was the T2a camper van, built from 1967 to 1971 – to this day the truly iconic camper for globetrotters of all stripes. 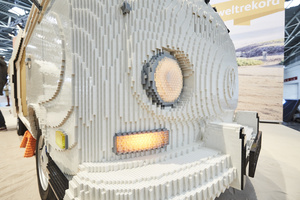 Are we going to manage it – or are we going to run out of bricks or time? This anxious question posed by Rene Hoffmeister, one of only twelve officially certified LEGO® model makers in the world, was definitely justified. For, together with colleague Pascal Lenhard, he had a period of only six weeks for the ambitious world record attempt to make a T2 camper van, inclusive of pop-up roof, out of LEGO® bricks by the start of the f.re.e trade fair in Munich. Using 3D programmes, the duo had produced a construction plan in advance. From that they were able to calculate, for instance, the precise number of bricks required. The rigidity of the side walls and windows were another particular aspect that had to be accurately calculated in order to ensure lasting stability. 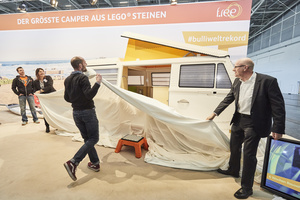 When, having begun without a hitch, they suddenly found they were missing 20,000 transparent bricks for the T2’s windows and their supplies dried up without warning, the deadline did then cause the model-making experts some stress despite their painstaking planning. “Essentially, we would have needed a 9-day week”, recalls Hoffmeister. “However, as they don’t exist, the only option was night shifts.” Hoffmeister and Lenhard therefore carried on ‘playing’ with their LEGO® bricks from morning to night and over the weekends in order to still finish it in time for the f.re.e trade fair. And they did so inclusive of the Westfalia pop-up roof, so popular on campers, the sliding door, which was technically very challenging to create, and the interior fittings. Also impressive are the dimensions: the LEGO® camper van measures over 5 metres in length, 1.9 metres in width and close to 2 metres in height; in fact the popped up roof projects no less than 3.0 metres up towards the sky. 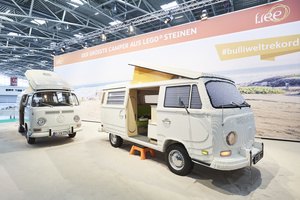 Both camper vans can be admired at f.re.e in hall C5 on stand 103. A trip to Bavaria’s main travel and leisure fair is even more worthwhile this year, as the Caravanning & Camping section has been made 25% bigger through the addition of a new hall. Volkswagen Commercial Vehicles’ ‘real’ camper vans are being shown in hall B4 by trading partners Christl & Schowalter (stand 100/101) and MAHAG (stand 401/501). The halls open daily from 10 a.m. to 6 p.m. from 20 to 24 February. 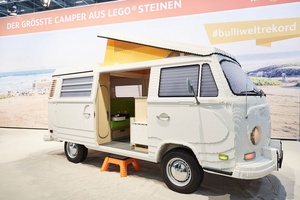 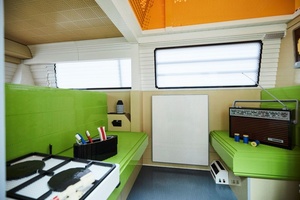 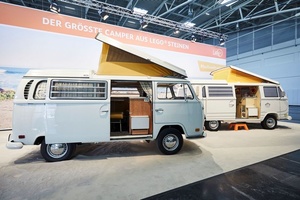 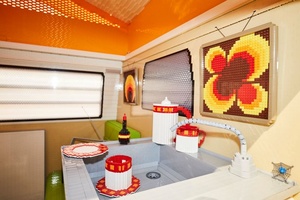