In addition to trucks and buses powered purely by battery-based electric units, Daimler Truck AG’s commercial vehicles will also be using fuel cells as the source of energy: Trucks will go into series-production in the second half of this decade, customer trials are scheduled for 2023. And real-life tests of urban buses in customer’s hands are also coming up. The on-board power station generates electricity from hydrogen. The company can look back on extensive experience with this technology – fuel cell research started 30 years ago.

On 25 February 1991, development of a fuel cell unit to power an electric vehicle began with a project proposal from Dornier GmbH in Friedrichshafen, then a member of the Group. This was the era of the “Integrated Technology Group”: it was under this corporate umbrella that the then Daimler-Benz AG united several companies from different industries. Such fields as digital and computer electronics as well as space travel enriched the Group’s knowledge pool, which also benefited the traditional field of automotive technology.

Dornier was developing systems for manned space travel, including an AFC fuel cell (alkaline fuel cell) to be used for supplying energy. In the 1980s, a new fuel cell technology emerged: the proton exchange membrane fuel cell (PEMFC). That system uses comparatively low temperatures between 60 and 120 degrees Celsius, which makes their use as energy converters in electric cars to generate electricity from hydrogen conceivable. This is exactly what developers within the group proposed. However, the idea was initially rejected – the time for this move was obviously not yet ripe.

Then the project was given a boost in 1991: Prof Hartmut Weule had taken over the management of the research division of Daimler-Benz just before this. As a result, he accepted the draft scheme to develop a fuel cell power unit for an electric vehicle.

Just two years development time for the very first demonstration model
That was the green light the engineers had been waiting for. Within only a few weeks, they had developed a well-defined concept for a drive module and presented it to Weule. In November 1991, he approved the construction of a demonstration model and released funding for two years. This was not very long for the development of a technology that had, up to that time, never existed in that shape. But the objective of emission-free mobility was tempting: the electric current for the drive motor was generated by electrochemically converting hydrogen, the only by-product of which was water. 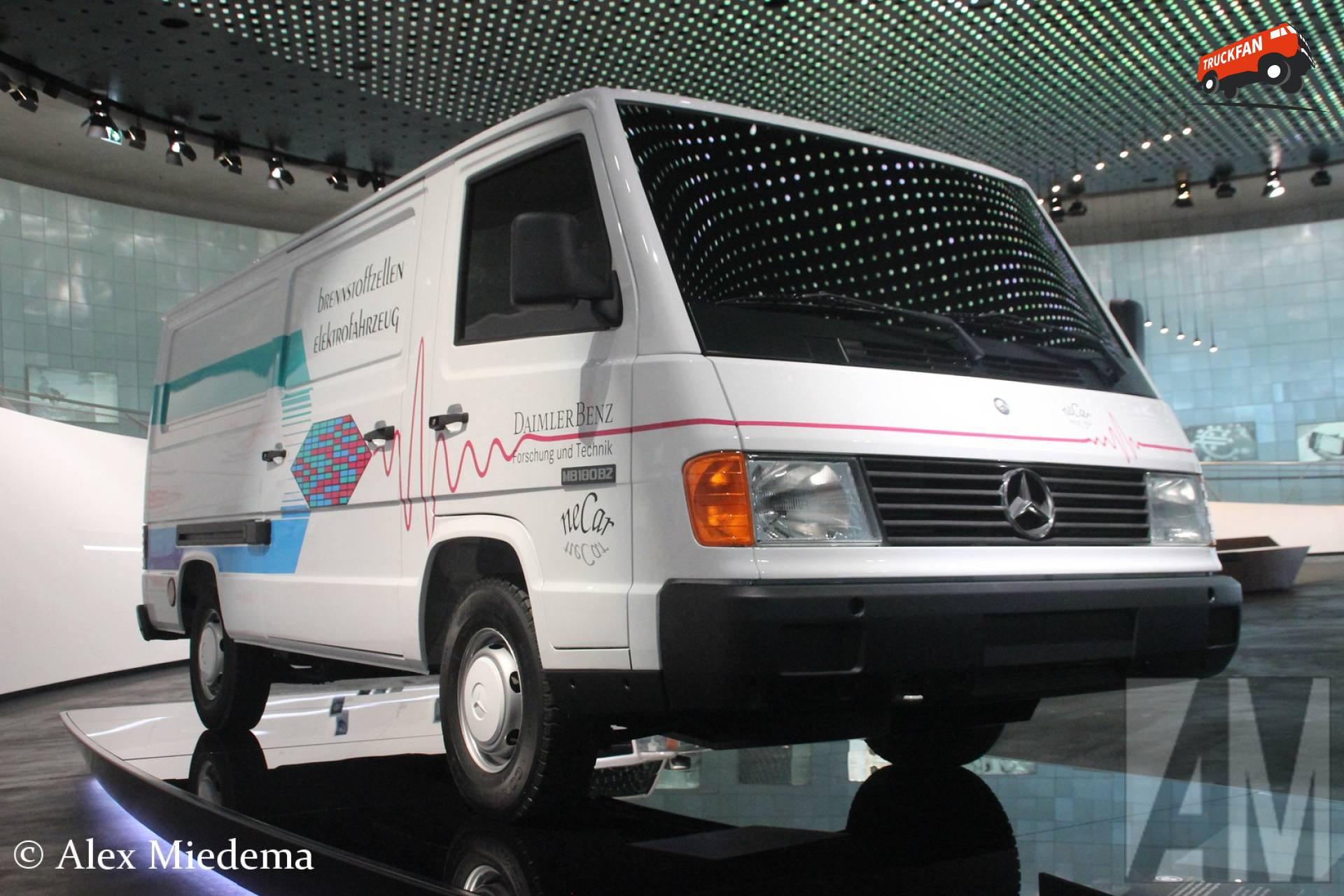 The rest of the story is history and the rapid development phase was a success. On 13 April 1994, the company unveiled the NECAR, the “New Electric Car”, to the public. By that time, the innovative vehicle already had several thousand kilometres on the clock – it had been out on the road since December 1993 and had run without any problems all that time. This was a further milestone in the innovative history of Mercedes-Benz. 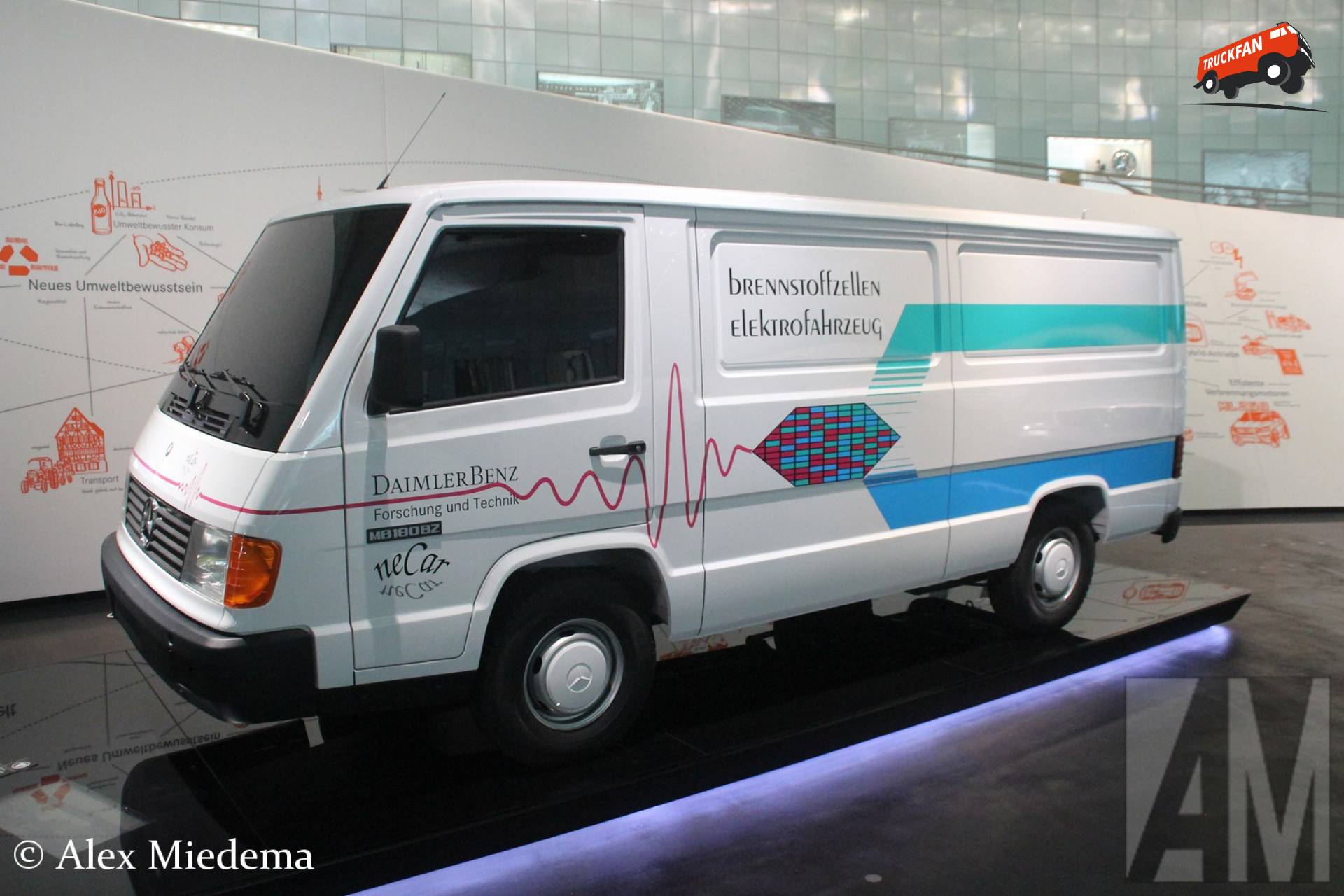 A Mercedes-Benz MB 100 van became a mobile laboratory for the technology of the future. Not because commercial vehicle applications were the main focus at the time, but because the drive module weighed around 800 kilograms and still required a great deal of space – taking up almost the entire load compartment. The vehicle fulfilled its mission and demonstrated that fuel cell drives were, indeed, suitable for road vehicles. The NECAR managed to cover around 130 kilometres on one tank of hydrogen and its top speed was 90 km/h. The output of the electric motor was 30 kW (41 hp). The NECAR was a milestone. Today, it stands in the Mercedes-Benz Museum in Stuttgart. 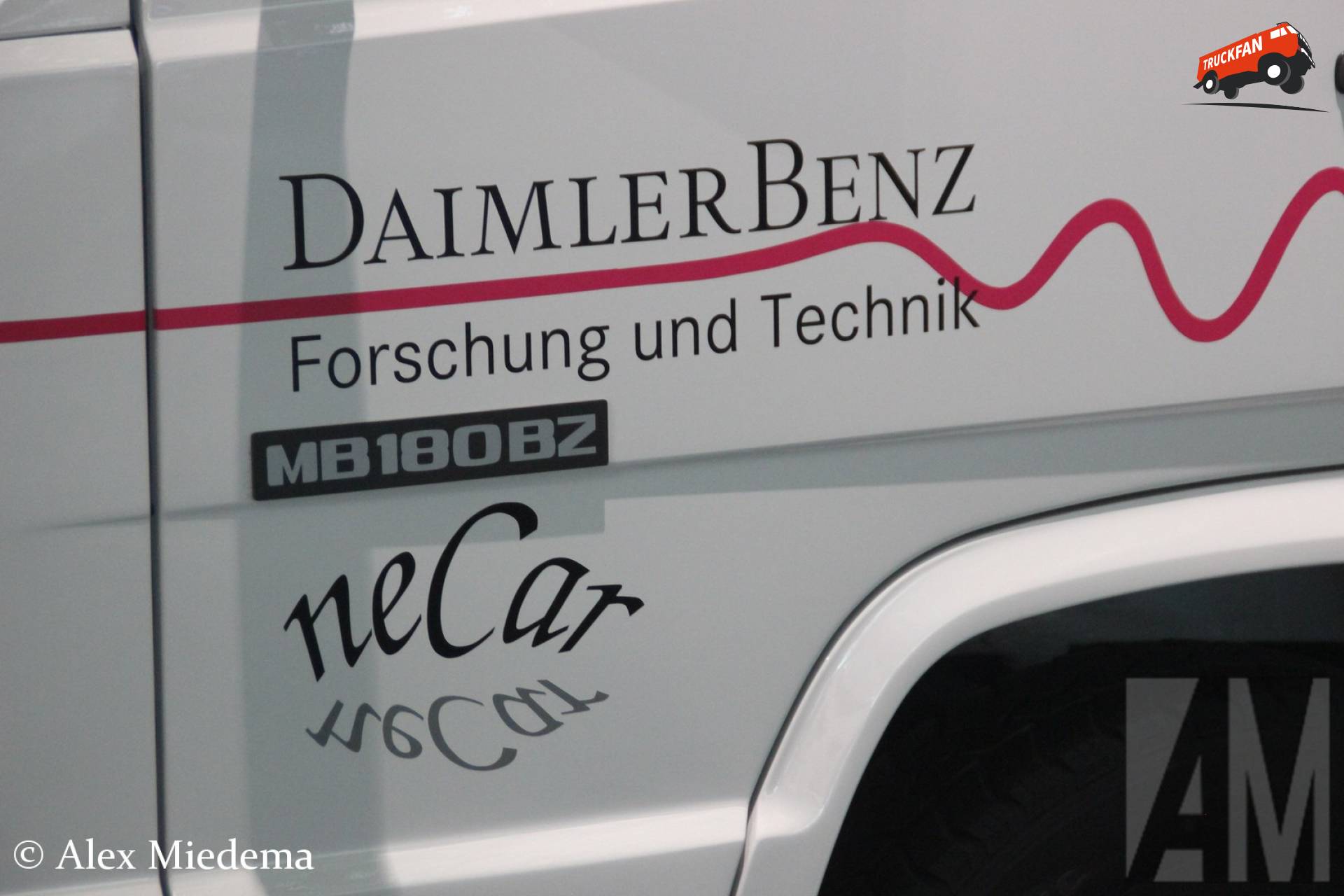 The company continued along this path. The development steps in the following years made fuel cell technology more suitable for everyday use. For example, it became easier to integrate all the components in vehicles, performance increased and cold start capability improved. Each individual Mercedes-Benz fuel cell vehicle documented the progress made in development over the subsequent years. Commercial vehicles were also equipped with the innovative drive technology. Buses running regular passenger services were also tested – with a premiere in the NEBUS (New Electric Bus) in 1997. In the subsequent years, Mercedes-Benz gathered valuable knowledge with some dozen city buses on Citaro basis in regular service in numerous metropolitan areas in Europe, Australia and China.

The Mercedes-Benz GLC F-CELL prototype car was presented in 2017 at the International Motor Show (IAA) in Frankfurt. This, the world’s first electric vehicle with fuel cell and plug-in hybrid technology, was used initially by fleet customers from 2018 and by other business and private customers from 2019. In just three minutes, the vehicle’s tanks could be filled with hydrogen gas at a pressure of 700 bar. The hydrogen-based range of the 155 kW (211 hp) electric vehicle was around 430 kilometres in the NEDC European driving cycle, plus approximately another 50 kilometres in hybrid mode using electricity from the battery.

The fuel cell in commercial vehicles
Daimler Truck AG has focused on the further development and application of fuel cells in heavy trucks and urban buses. The fuel cell is ideal in battery-electric urban buses as a range extender. For trucks, it is predestined in flexible and demanding long-haul transport operations of up to 1,000 kilometres and more – thanks to the use of liquid hydrogen. In 2020, Daimler Truck AG celebrated the world premiere of the Mercedes-Benz GenH2 Truck, a fuel cell concept truck. The company plans the production launch for the second half of the decade. Also last year, Daimler Truck AG founded Daimler Truck Fuel Cell GmbH & Co. KG to bring together all the fuel cell activities throughout the Group. In addition to Dr Andreas Gorbach, the Management Board includes Prof. Christian Mohrdieck, who has been responsible for and actively promoting fuel cell activities at Daimler in various management positions for more than two decades. Daimler Truck Fuel Cell GmbH & Co. KG is to be transferred to a joint venture with the Volvo Group. A binding agreement for this was signed by the Volvo Group and Daimler Truck AG at the end of 2020. The aim is to develop, produce and commercialize fuel cell systems. In addition to use in heavy trucks as the primary focus, the systems will be offered for other applications, too. 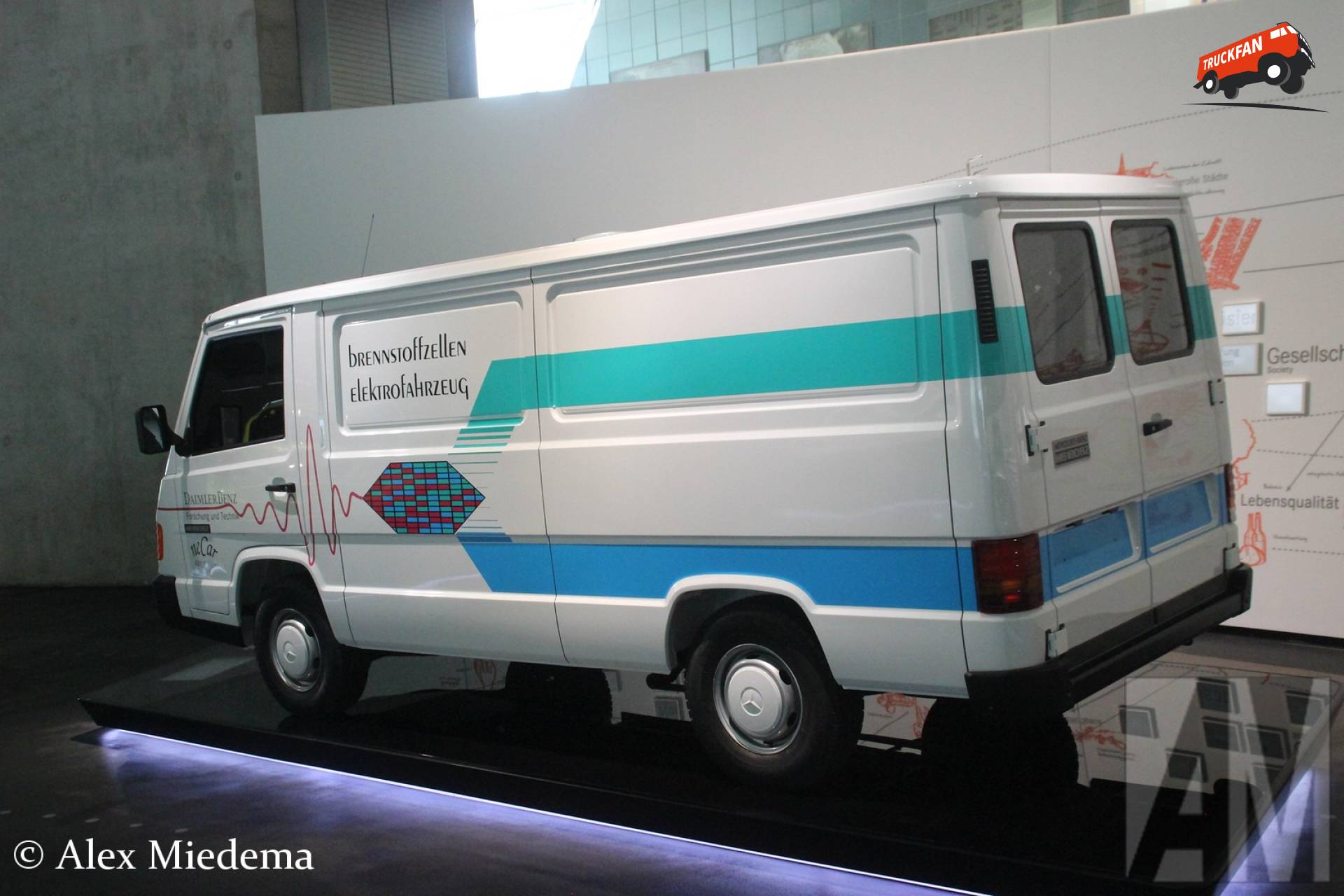