Home
bussen
What do a Mercedes-Benz bus and tango have in common? 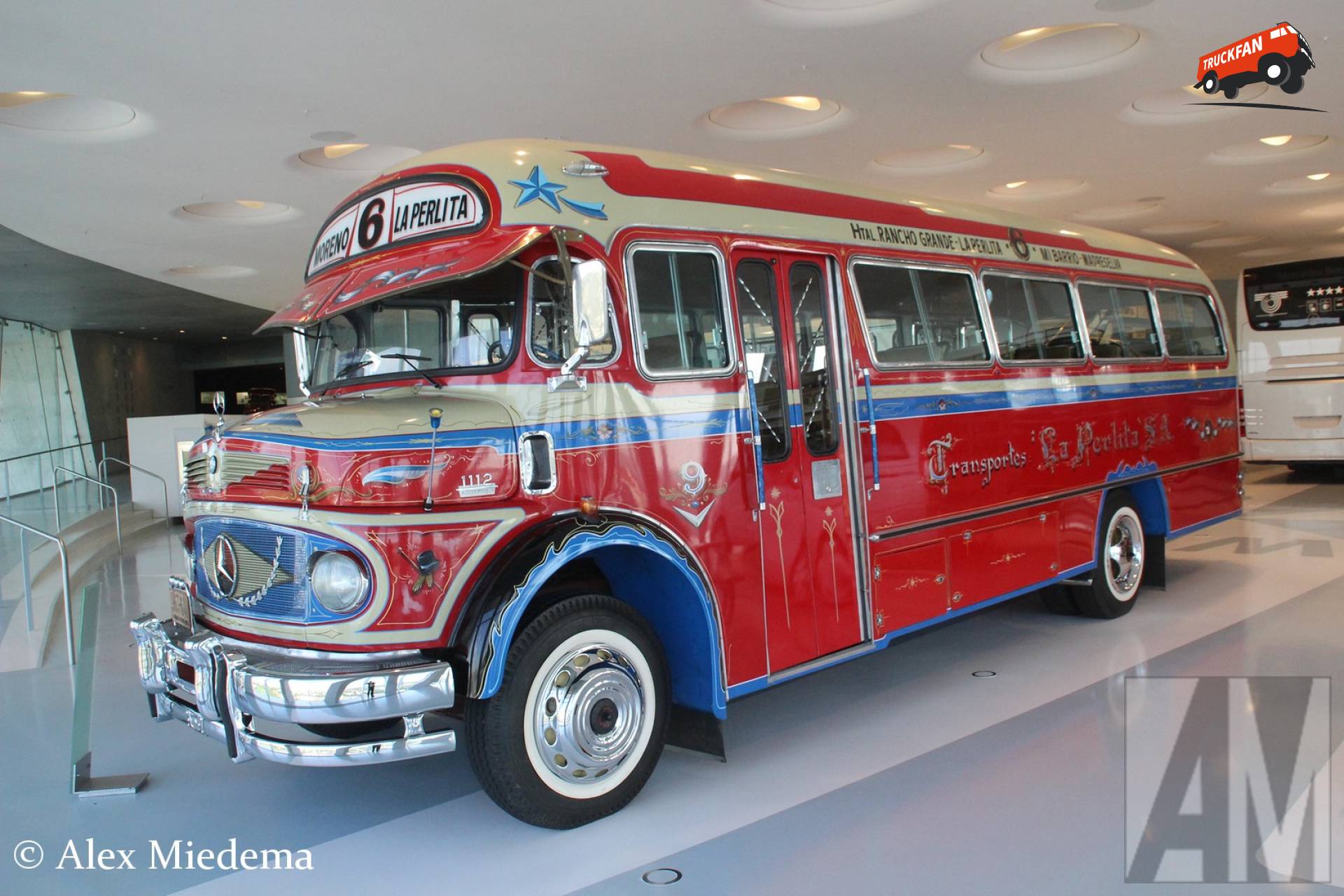 Close-up – the name of the series by the Mercedes-Benz Museum says it all. Each instalment tells surprising, exciting, profound stories. To this end, it shines a spotlight on details of a vehicle, exhibit or element of architecture and design. In the spotlight this time: the Mercedes-Benz LO 1112 bus from 1969. 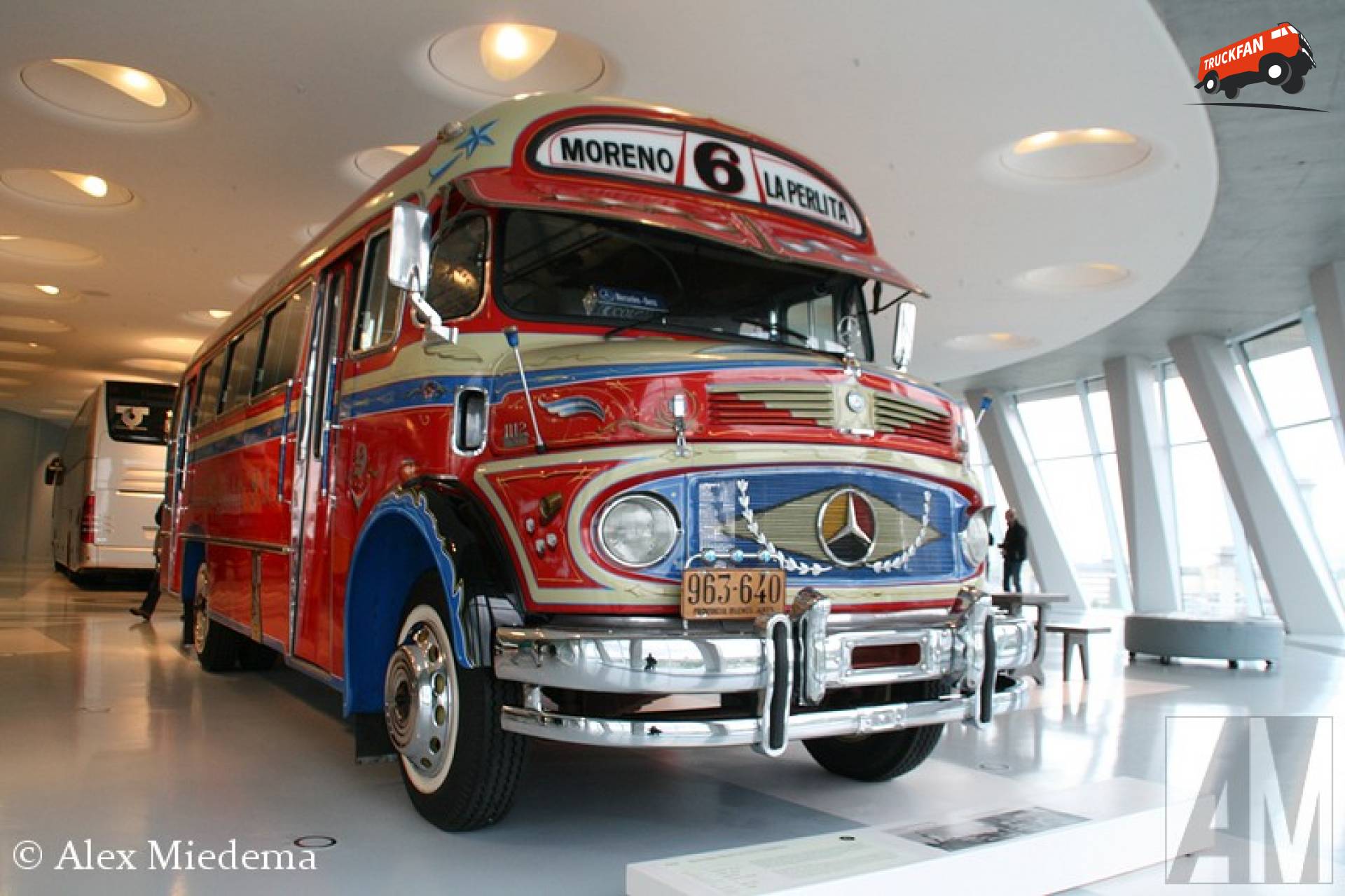 Darling of the public: With its countless colourful details and motifs, the Mercedes-Benz LO 1112 almost magically attracts the eye in the Collection Room 1: Gallery of Voyagers – because no other exhibit in the Mercedes-Benz Museum is as eye-catching as this colourful bus. And then in XXL size to boot. 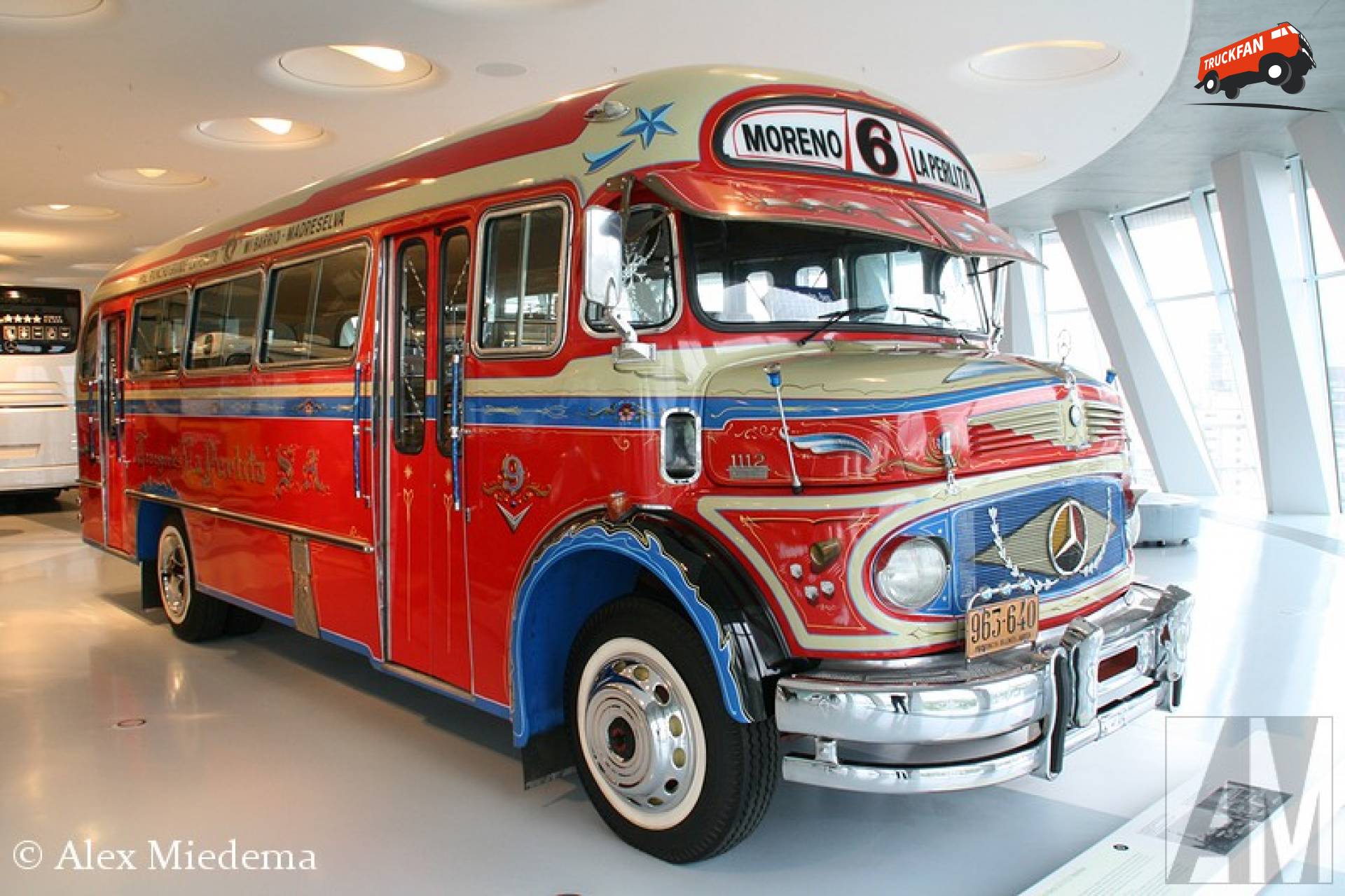 Landmark: The LO 1112 comes from Argentina. The bus is designed in the “fileteado porteño” style. This artistic tradition for passenger transport vehicles in Buenos Aires, with curlicues, garlands, flowers and symbols of bright colours, was created at the end of the 19th century. It was first used for decorating horse-drawn carriages. “Fileteado porteño” even served as an anti-theft device because each carriage was unique. Later, buses continue the tradition, are part of the street scene of the Argentine capital for decades and are an attraction for tourists. 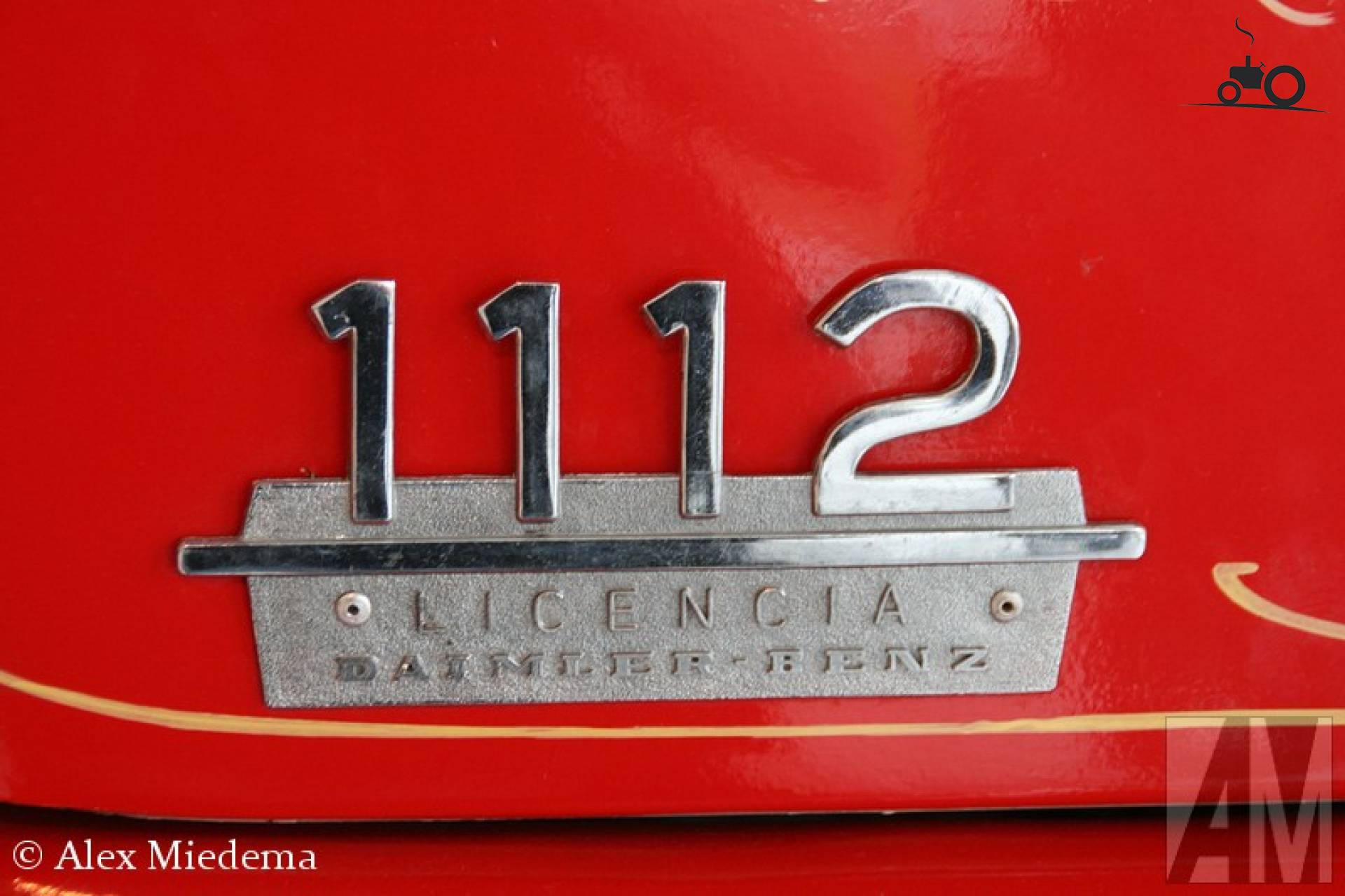 Significance: UNESCO considers “fileteado porteño” to be so significant that the institution declared the style an intangible cultural heritage in December 2015. Just like another Argentinian tradition back in 2009: the tango. 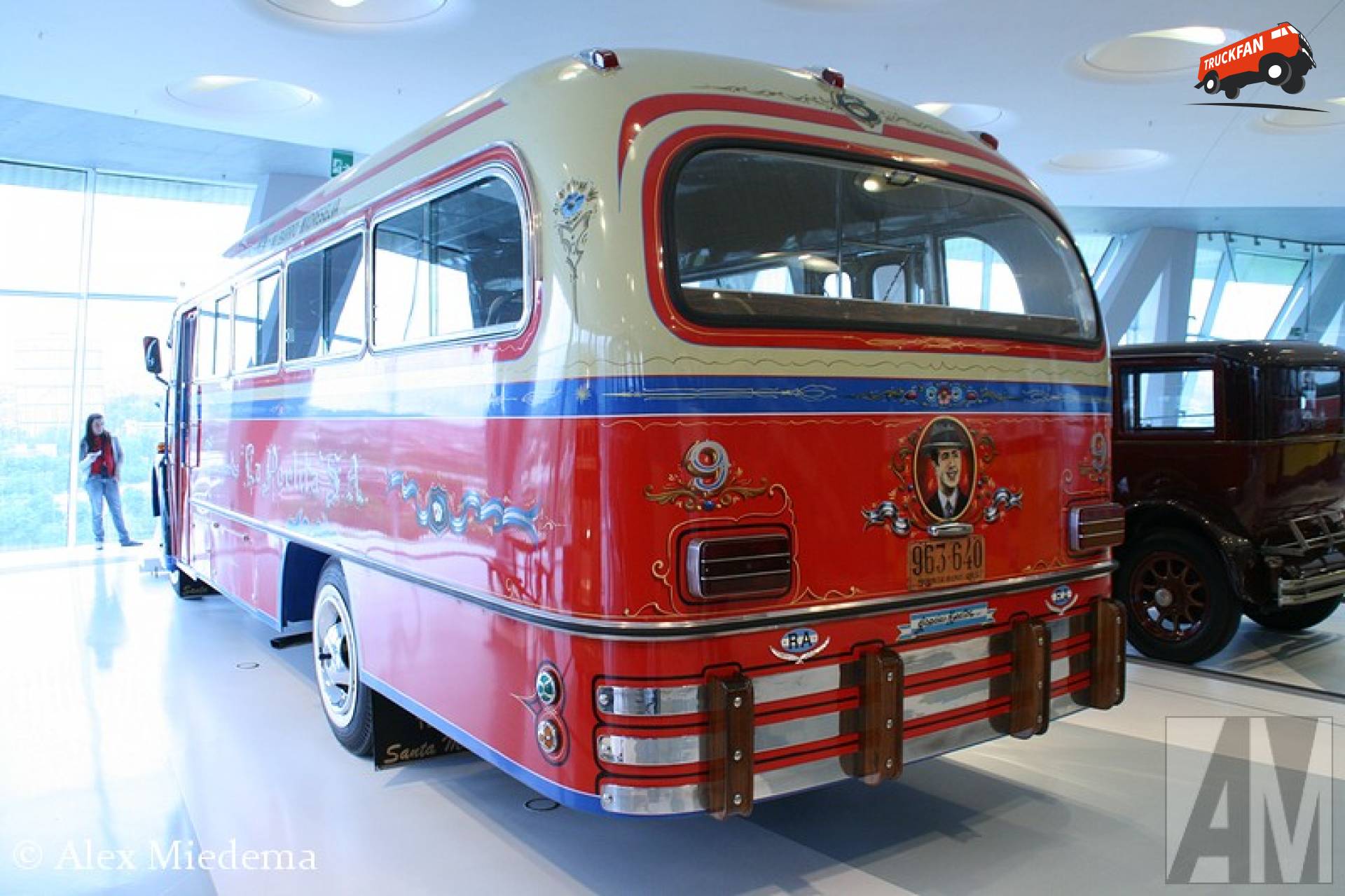 Cosmopolitan: The LO 1112 is one of the popular short-nosed vehicles built by Mercedes-Benz from the 1950s onwards as trucks and for export as buses. They are considered indestructible and are treasured the world over. Their friendly face with round headlamps, curved wings and the large Mercedes star in the radiator grille makes for a likeable appearance. Incidentally, the “L” in the model designation LO 1112 stands for “Lastwagen”, the German word for “truck”, and the “O” for omnibus. The bus in the Mercedes-Benz Museum has a total weight of eleven tonnes. The “12” stands for the engine power in the old unit: 88 kW (120 hp) power the vehicle. A total of 5,338 LO 1112s are produced between 1965 and 1973. 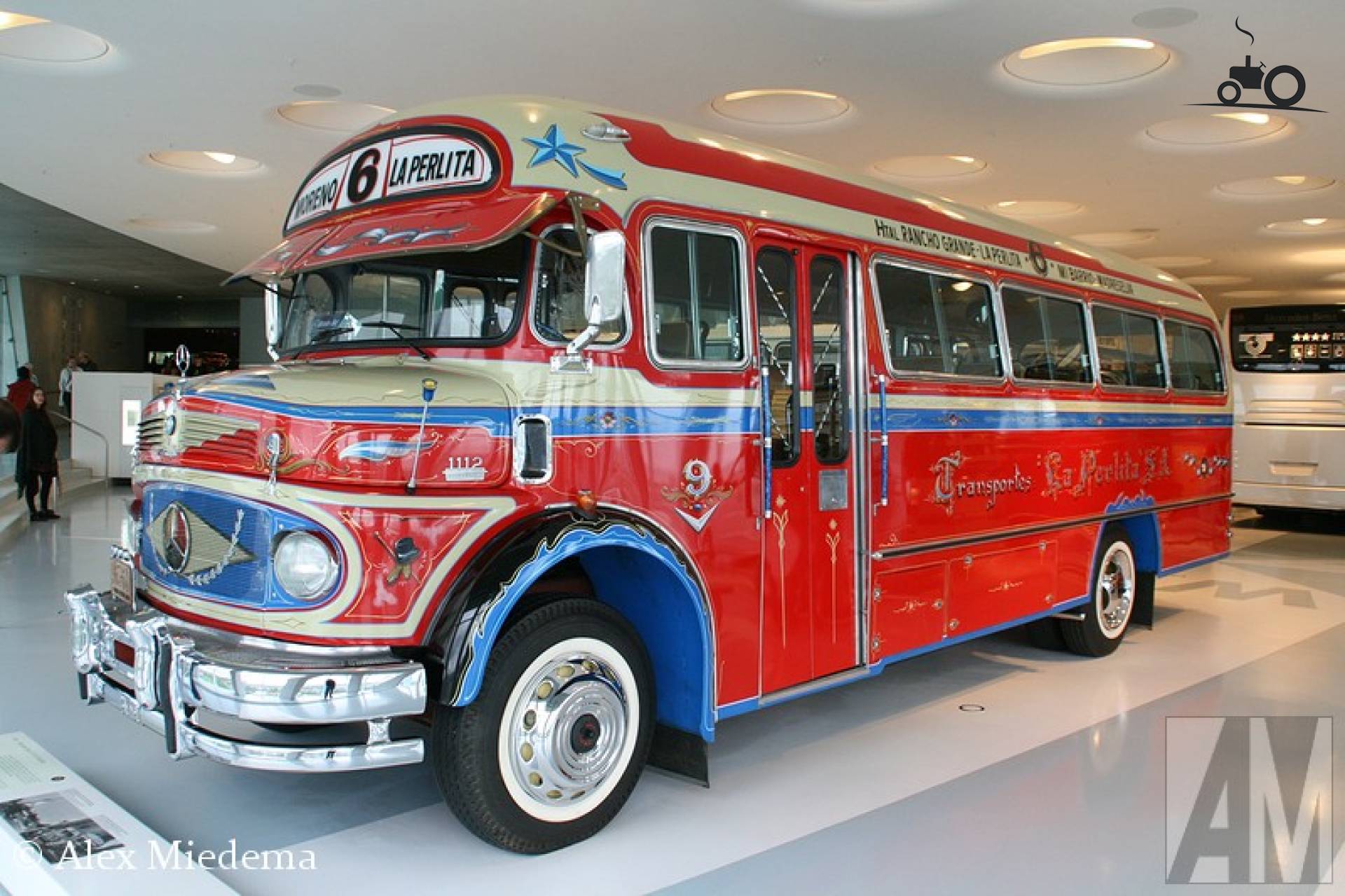 Everyday helpers: The Mercedes-Benz Museum’s LO 1112 is acquired in 1969 by Hector Prieto, who serves Line 6 together with colleagues. Because there are no municipal transport companies in Buenos Aires, drivers who have their own bus join forces and set up regular services together on one line: the “colectivos”. They run in the streets of the capital at times that can be relied upon and constitute the backbone of local public transport. The colourful design also serves as advertising: because on the lucrative routes through the Argentine capital there is not just one entrepreneurial community but several groups competing with each other. Each and every driver uses conspicuousness and appealing popularity to attract as many passengers as possible, which means money in the bank. 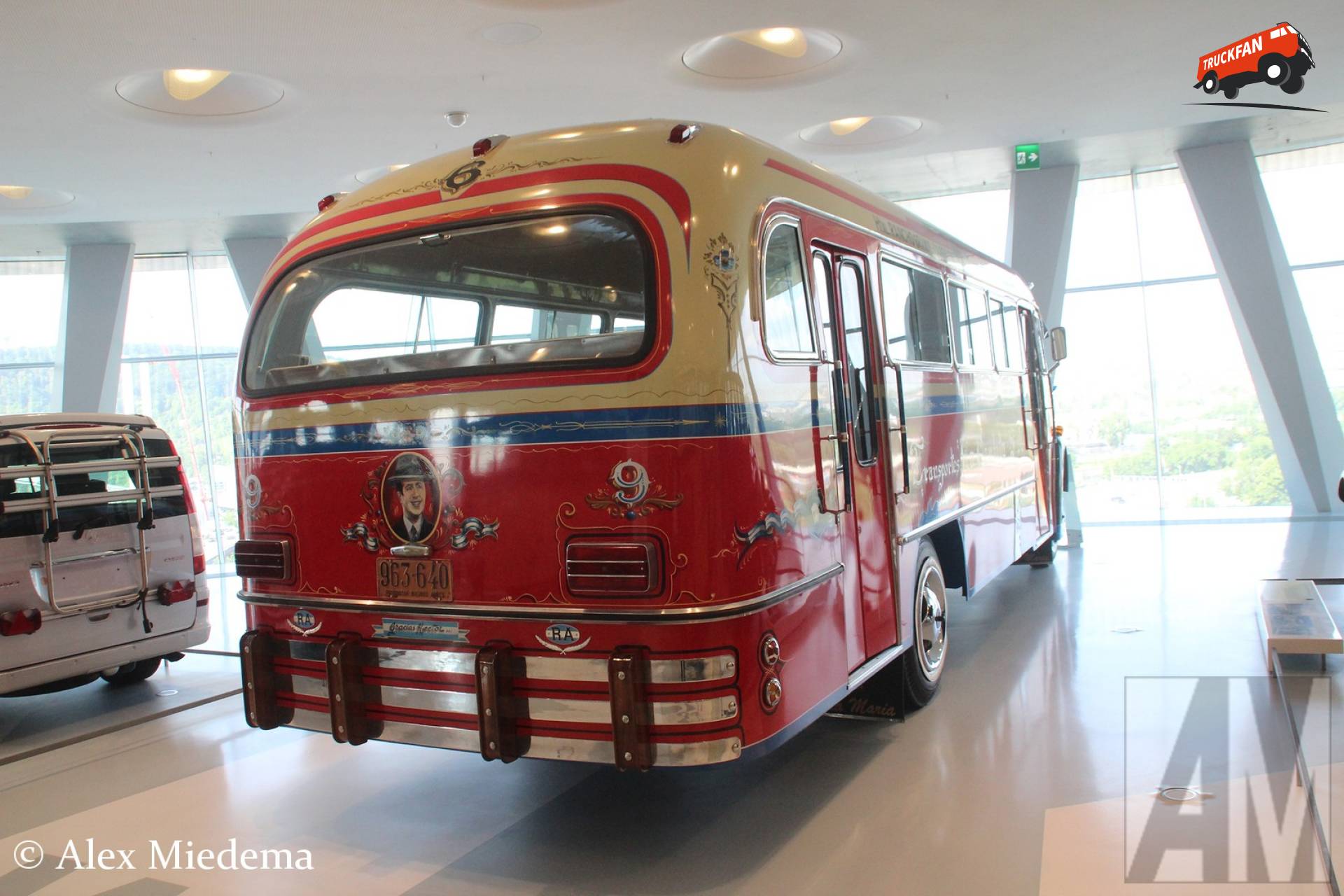 Expenditure: Prieto has the vehicle customised both inside and out. Hardly any visible surface remains untreated. Colours and chrome, as well as patterns etched into some windows make the LO 1112 a work of art on wheels. The décor includes a particularly large number of Mercedes stars, a fine testimony to the owner’s high brand affinity and pride. His company is called “Transportes La Perlita S.A.”, as it is painted on the side. 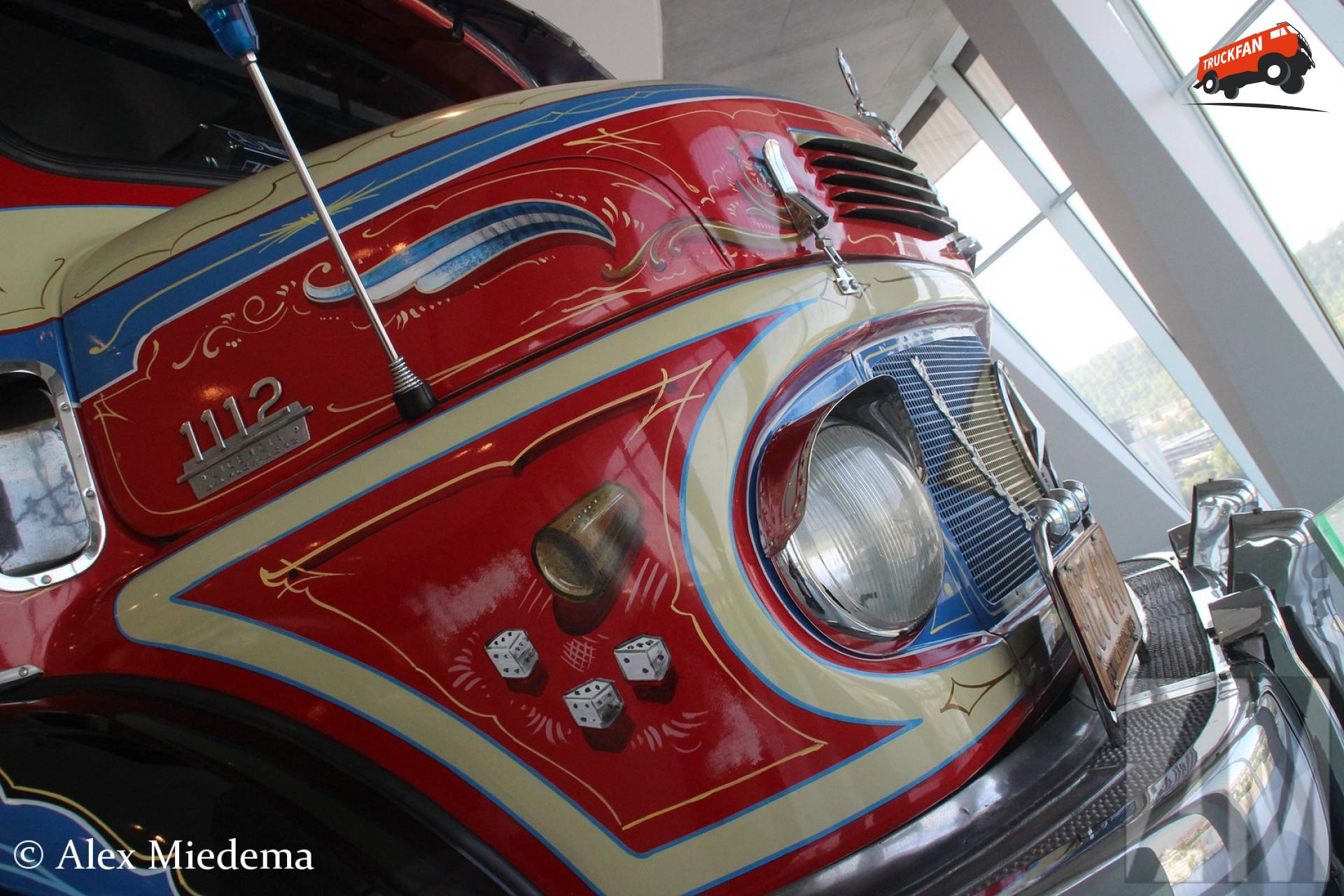 Customisation: Characteristic of Prieto’s bus are the numerous painted symbols of luck on the outside and inside, such as playing cards and dice or magic accessories. In this way, the bus becomes a lucky charm for driver and passengers alike. Prieto himself places his right hand on a Christ figure countless times every day: it is located in the gear knob. And emblazoned on the rear – widespread in the fileteado – is a picture of Carlos Gardel, an icon of tango. Although dead for more than 30 years by the end of the 1960s, the tango singer and composer is unparalleled in popularity in Argentina. 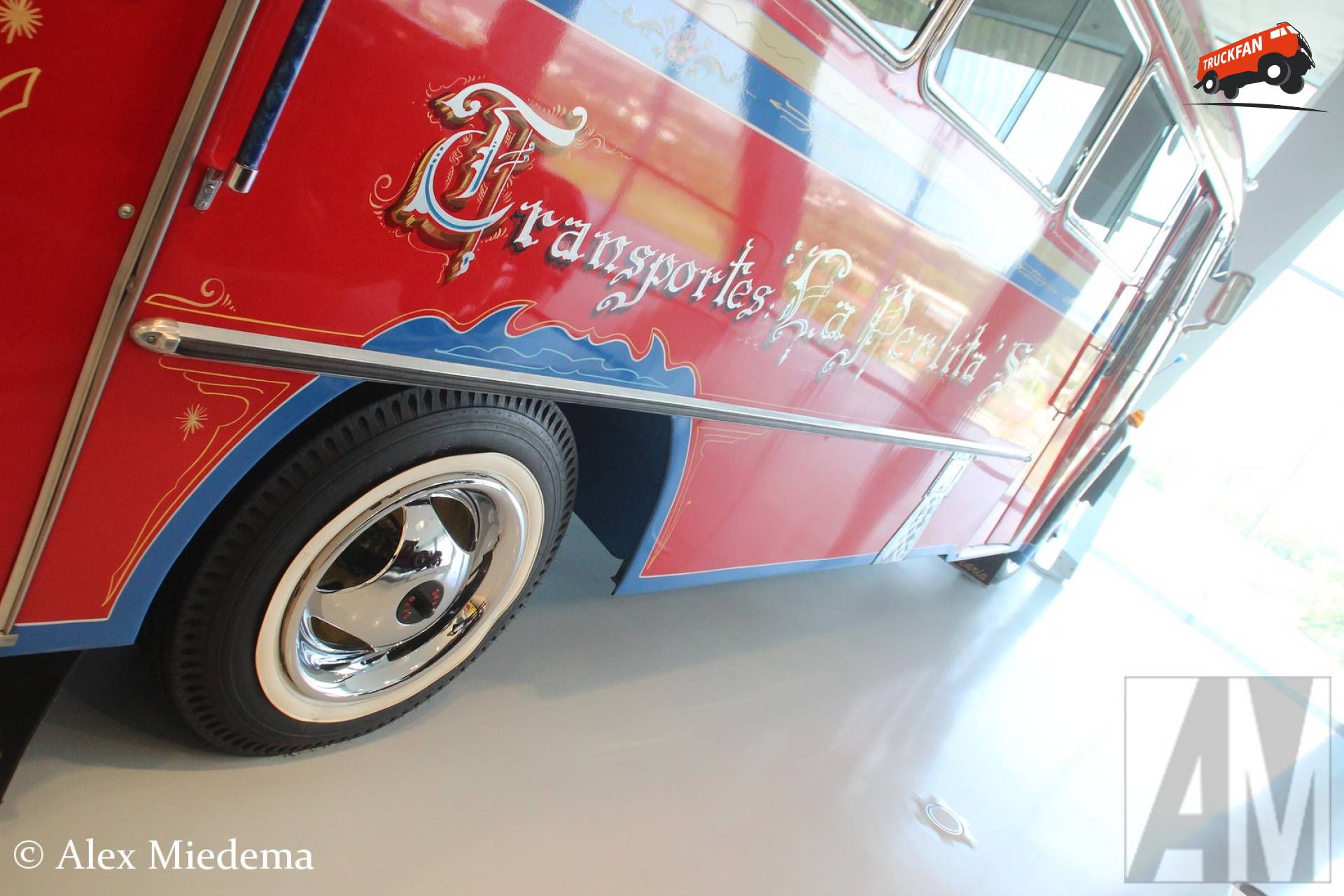 Decline and recovery: The end of the classic “colectivos” comes in 1975. The city administration bans “fileteado porteño” style buses in order to standardise public transport. Little by little, the number of colourful buses in Buenos Aires is dwindling. Prieto also decommissioned his jewel in 1984 after 15 years of service. For many years, the magnificent LO 1112 stood in a depot. In 2006, the city council lifted the ban on the “fileteado porteño”, but by then the bus had long since found a new and unusual purpose: when Mercedes-Benz was planning the new Museum building and was looking for exhibits with a special biography, Prieto, long since a successful bus entrepreneur with a large fleet of vehicles, jumped into action: in 1999, he had the bus completely restored to its former glory. That same year, the bus then embarked on its journey by ship to Europe, rolling into Stuttgart on its own wheels, and has been part of the Mercedes-Benz Classic vehicle collection since October 2000. 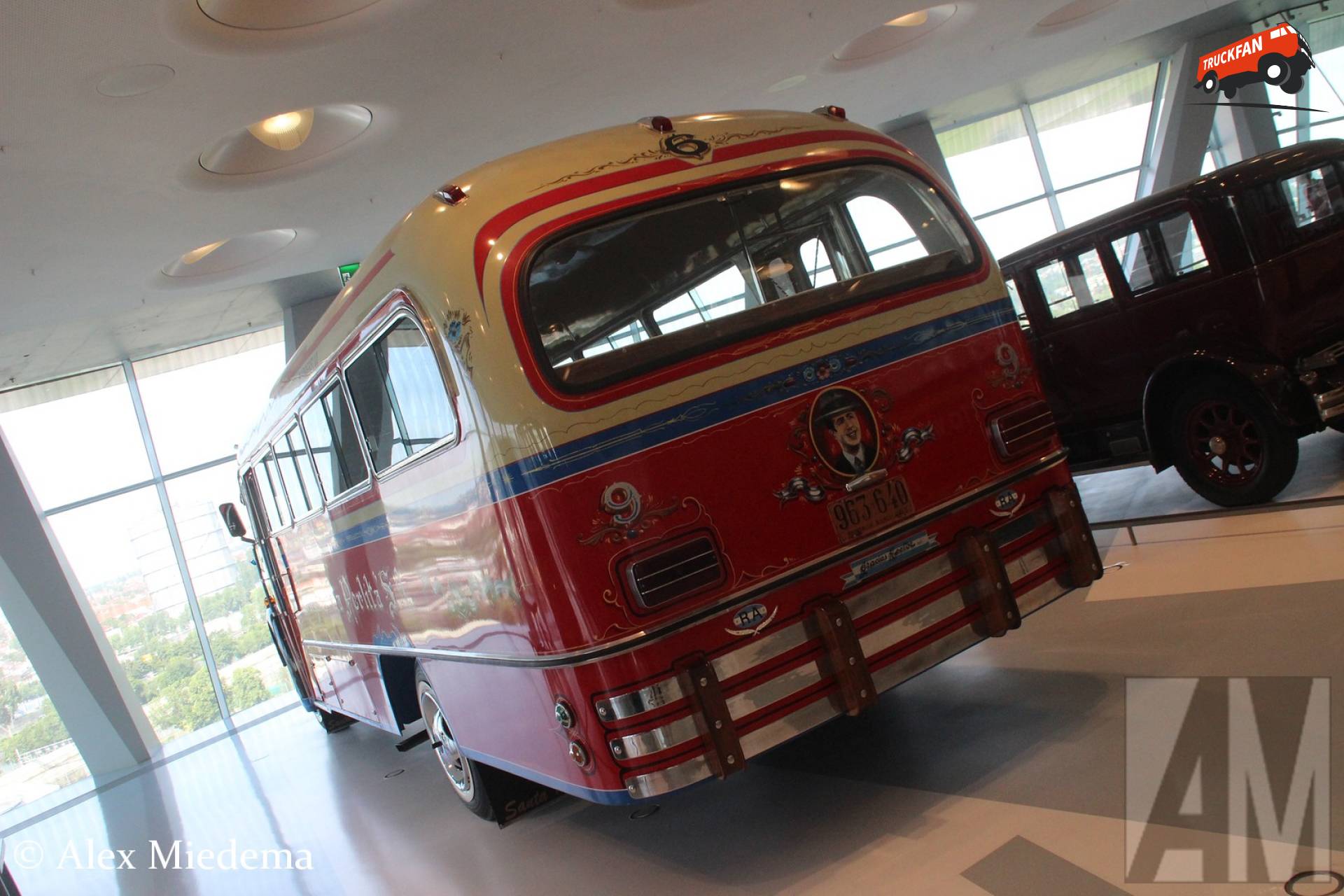 Visit from Buenos Aires: The LO 1112 has been on display at the Mercedes-Benz Museum since it opened in May 2006. Guest of honour then: Hector Prieto. He travelled from Argentina with his family to see the presentation in the permanent exhibition for himself. And he is pleased that his bus with its colourful livery is attracting guests as it once did in Buenos Aires. Eternal greeting included: on the rear bumper, the entrepreneur has immortalised himself with delicately painted lettering. “Gracias Hector” is written there – the quoted thanks of his satisfied customers when they got off and the colourful bus bid them farewell as it drove off.